Our Lady of the Sacred Heart 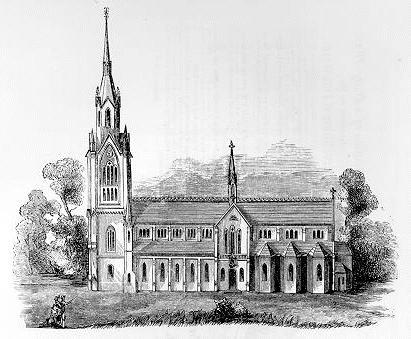 Architectural Drawing of Proposed New Church, ca. 1870
Plans for a new college church were well in hand by 1870. On the 31st of May, 1871, with six bishops present, the cornerstone of the present church of Our Lady of the Sacred Heart was laid. The church was ten years a-building. And in that decade the plans underwent many changes. But it turned out to be the loveliest thing on the campus. There are so many beautiful features about the church that no complete description of them will be given here. We merely note that for its decoration Father Sorin secured the services of a very creditable artist, Luigi Gregori, whom he met in Rome. The high altar, a curiously graceful object in bronze, was executed in the studio of Froc Robert in Paris. The windows were designed by the Carmelites of Le Mans, and manufactured in that city. The most pleasant thing to recall about this church is the fact that its aisles have resounded to hundreds of thousands of young feet bearing men to a Celestial Banquet. That is the dearest memory of many a Notre Dame man.
. . .

It was in the fall of 1875 while the old church was being razed and the new one being constructed, that the Scholastic noted the removal of the remains of Fathers Deseille, Petit, Cointet, and Mr. William Phelan. Mr. Phelan, it will be remembered, was one of the earliest benefactors of the institution, and the stepfather of Rev. Neal Gillespie who had died shortly after the decease of Father Lemonnier. Today, these bodies lie beneath the foundations of the present church at Notre Dame.

In the basement chapel of Sacred Heart Church lie the remains of America's greatest Catholic philosopher of the nineteenth century, Orestes Brownson.

Sacred Heart Church, the campus chapel, had undergone no serious renovation since its completion in 1888. The lighting system was antiquated, Gregori's frescoes had become clouded, and there were cracks in the walls. Mr. Wilfred E. Anthony, a New York architect, was asked to draw up plans for a renovation of the church. Father Lawrence Broughal was the University advisor on this occasion. The restoration was completed in 1931 and was highly satisfactory to everyone. In the church tower was placed a new automatic clock. The chimes were synchronized in such a fashion that the quarter hour would be indicated by a stroke of the bells. At stated intervals, a few bars of some Catholic hymn would be heard on the chimes. A few minutes after ten each night "Taps" would be sounded in the tower.

Sacred Heart Church, which has been a center of worship at Notre Dame for more than 120 years, has received what Rector Father Daniel Jenky called "a great honor (for) the building and the faith community." from Pope John Paul II.

The Vatican has named Sacred Heart a minor basilica, a distinction which recognizes historically important churches and significant centers of worship and devotion.

The distinction is "a papal recognition that Sacred Heart is a church with an international reputation: it is a center for prayer, pilgrimage and devotion and a place where the liturgy is done with amplified richness," Jenky said.