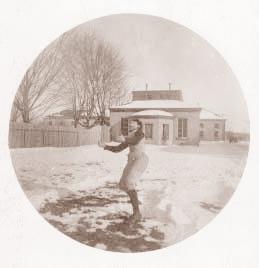 Gymnasium, 1890s
On the 2nd of December, 1843, Father Sorin inserted in the South Bend Free Press a notice of his intention to found a college at Notre Dame. . . . He describes the college building as being equal to anything in the United States, probably quoting the architect; he promises a gymnasium to provide the last word in recreational facilities.
. . .

. . .
In 1898 the president succeeded in erecting a new gymnasium. It was a brick structure, two hundred feet long, one hundred feet wide, and twenty-five feet high. There was a half-moon roof supported by arches spanning the walls. There was a dirt floor, as there is today. There were lockers and showers. Over the front portion of the building was a room 100 x 35, corresponding to the present "apparatus room." One can hear Father Morrissey say: "Athletics . . . to be sure, is subordinate to morals and the attainments of the mind, but its functions are positive." From one who shunned vigorous exercises in any form, this was commitment a-plenty. The gymnasium was dedicated on March 11, 1899 on the occasion of a track meet in which Chicago University, the University of Illinois and Notre Dame participated. Father French presented the medals and wreaths to the victors. The result of the meet was Notre Dame, 36; Chicago, 28; Illinois, 25.

On November 9th in the following year (1900), as the students were coming from class, they noticed smoke pouring from the front of the gymnasium. In spite of the fact that the fire department from South Bend responded in less than quarter of an hour, the building was reduced to a complete wreckage within an hour and a half. No one ever discovered the origin of the fire, but it represented a loss of about $20,000, the rest being covered by insurance. Father Morrissey manifested all the alacrity of his predecessors, and began a new and better gymnasium. This time the building eliminated all possible fire hazards. It was ready for use in February, 1901.