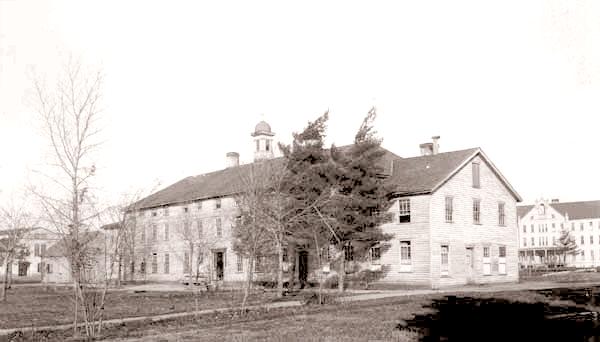 Manual Labor School, 1888
That July afternoon, 1835, when Father Badin had met Bishop Bruté in Pittsburgh, and transferred the Notre Dame property to the Bishop, he stressed particularly his desire that the care of orphans should loom large in the plans of whoever finally got the property. Poor and crowded as the community was, Notre Dame began to acquire orphans from the very first. Almost without exception, these orphan children were destitute. The most reasonable charity, therefore, was to teach them some useful trade whereby to earn a living when they should reenter the world. Among the Brothers, Father Sorin had many excellent tradesmen -- bakers, carpenters, brick-masons, farmers, and tailors. These orphans, working under the Brothers, could acquire a trade, while, at the same time, their industry would, in part pay their way at the school.

The orphans, or rather apprentices, as they were called, had a program quite distinct from the ordinary student. It was to their advantage to learn a good trade, and that as quickly as possible. They took no part in the course of studies as outlined for the college boy. In fact, but for the over-crowded conditions, they would have had little contact with the ordinary student. Not that any premium was placed on snobbery. Not that the apprentices were not considered good enough. But since their whole day was spent in manual labor, they had little interest in what the college boy was doing. This distinction became all the more actual when, once more Senator Defrees offered his kind services in obtaining a charter for the Manual Labor School. It was organized under the Brothers of St. Joseph, and for over sixty years procured for hundreds of unfortunates, a hope and chance for the future.

This Manual Labor School was the first Catholic trade school in the United States. The Sisters of Charity, and others, had for years maintained orphan asylums for younger children. But no provision had been made for these children as they grew up. Now that the Brothers of St. Joseph were taking care of this problem, several Bishops, among others, Bishop Purcell of Cincinnati and Bishop Hughes of New York, pleaded with Father Sorin to give them Brothers that they might erect in their own dioceses schools of the same kind.

The Manual Labor School was situated on the west side of Notre Dame Avenue just in front of the college entrance. In 1886 it was moved, on wheels, west of the college grounds and near the farmhouse. The carpenter, blacksmith, and paint shops which were opposite the Manual Labor School on the same side of Notre Dame Avenue were likewise moved to new locations. The removal of the buildings permitted Brother Peter and the surveying class to lay out a park and garden in front of the Main Building.

The Manual Labor School was a cream-colored, frame building with black trimming, three stories high and one hundred and twelve feet in length. It stood between the present sites of Walsh and Badin Halls. At that time there were about fifty boys in the school and in the shops or on the farm. The boys were given three months of elementary schooling every year. The other nine months were devoted to learning a trade in one of the several shops. In 1873 this program was revised in such a way as to give the student five hours a day at several trades and four hours of classwork. Students were accepted up to the ages of twelve and sixteen and could now, under the new plan, not only learn a trade but complete at the same time, in four years, the course of study as taught the commercial students. The students of the Manual Labor School were, like the Minims, completely separated from the other students, having their own dormitory, dining hall, play-grounds, and recreation hall.

In 1890 the training was altered somewhat so that the students were on a "forty-four hour week" -- eight hours a day, five and one-half days a week. During two hours a day and two hours each evening the students had study and classwork; the rest of the time was passed in the shops. The products of student labor were sold at the local market and the profits from them credited to their account. Since most of these students were orphans or from poor families unable to pay much, if anything, the boys were thus able to earn something while at the same time finishing their education. The Manual Labor School failed, however, to develop. As time went on, very few students were attracted to this sort of training. It never had more than sixty students at the time of which we speak. No doubt the fact that it was a constant drain on the financial resources of the Community was the principal reason for discontinuing it. But at a time when the West was developing, it was no small advantage for the hundreds of orphans and poor boys to have a chance to learn a trade so as to be able to find a place in society.