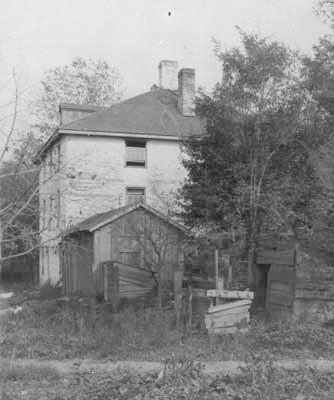 Before quitting Vincennes the previous November [1842], Father Sorin had consulted Mr. Marsile, an architect, and together they had drawn up plans for a college building to be erected at Notre Dame. It was to be in the form of a double hammer, one hundred and sixty feet long, thirty-six feet wide, and four and a half stories high. It was a pretentious project for one who was having difficulty getting enough meat and potatoes. Nevertheless, when Father Sorin left Vincennes it was understood that Mr. Marsile would come to Notre Dame the following spring to erect that building. In the meantime the architect expected Father Sorin and his Brothers to prepare as much lumber and brick as possible. And this they did, sixty thousand feet of lumber, and two hundred and fifty thousand bricks and the necessary lime.

When by late spring the architect failed to appear, Father Sorin and the Brothers began to get nervous. Without the guidance of Mr. Marsile, they did not feel capable of erecting so large a building themselves. But they had to have more room. So they drew up a plan of a small square brick building, of two stories. In a short time the building was ready. It is what is now called "Old College" or the "Mission House." It is wonderful what Father Sorin packed into that building. There was a dormitory for the expected students; a dormitory for the Brothers; a refectory; a bakery; a class-room; and a clothes room. This building is the only original landmark on the campus. It rests to the right of the library by St. Mary's Lake, in the midst of deep shade, dwarfed by stately halls, like a shrunken but contented mother surrounded by her numerous well-to-do children. To be sure, a little brick and plaster have been added. But the building still retains the simple, frank expression of the humble inception of Notre Dame. No gilded dome or towering spire, no flêche that cuts the sky, no ornate cornice or sculptured porch was born except in the lowly hopes of "Old College."

When it was finished and inhabited, the long-awaited architect arrived. On August 24th, he came with two workmen. Why he had so long delayed, we do not know. It seemed almost too late to start putting up the larger college building that had been planned. Nevertheless, the presence of the architect and his helpers kindled the feeling that the new structure might be started and, with good fortune, be reasonably complete. Most of the lumber and bricks were at hand. But there was very little money. Father Sorin got out the leather pouch and counted. All too little! But there were friends. Mr. Byerley, who had entertained Father Sorin in New York the day of his arrival, was now a resident of South Bend. He offered to loan Father Sorin five hundred dollars outright, and to extend two thousand dollars credit in the store he conducted in South Bend. Moreover, Father Marivault, one of the new recruits, had an inheritance in France. This he turned over to Father Sorin. It amounted to twelve hundred dollars. In all, Father Sorin had cash or credit for the sum of probably four thousand dollars. Well, what were they waiting for? Father Sorin decided to start building the central part of that double-hammered edifice; the two wings could wait for more prosperous days. 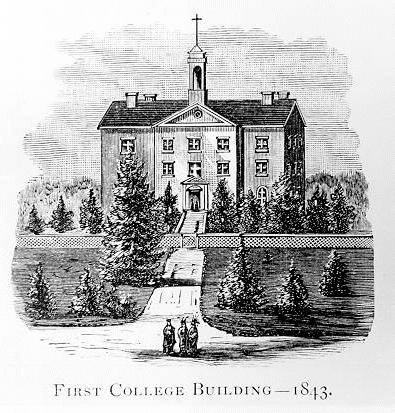 The architect had arrived only on the 24th of August; on the 28th, they had a formal laying of the cornerstone. Father Sr. Michael Shawe, vicar-general of the diocese, was there to bless it. Brick upon brick, you could see it growing every day. The mildness of the weather favored the workmen. It was hoped that it would be under roof before the snows came. And it would have been, too, had not a fire broken out in the yet unfinished building. This was the first of a series of fires that dogged the early college years. Fortunately, this time, the damage was slight, but it was sufficient to hold up the plastering until the following spring. By June, 1844, some of the rooms were ready for occupancy, and by fall the whole was completed, even to a bell hung in the cupola.