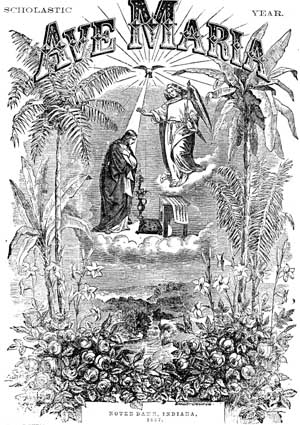 Daniel Hudson entered the Novitiate at Notre Dame on March 7th, 1871; was professed March 19, 1872; and was ordained with John A. Zahm at Notre Dame by Bishop Dwenger on June 4, 1875. Almost immediately, Father Sorin put Hudson in charge of The Ave Maria as editor. It was Hudson's first obedience, and the only one he ever received. The Ave Maria had been founded by Father Sorin in 1865 as a weekly periodical whose principal object was to increase devotion to the Blessed Virgin. Already, it had a fair subscription, but with a few exceptions the articles were not of a high literary quality. For fifty-five years Father Hudson remained the editor of this Catholic weekly. By his fine literary taste, his delicate discrimination, his cultivation of the best Catholic authors, he became -- it is no exaggeration to say it -- the leading Catholic editor of the country. Although he scarcely ever left the campus, his fame was national, and the greatest Catholics of America, bishops, priests and laymen, beat a path to his rooms on the second floor of the Presbytery.

THE SCHOLASTIC YEAR, later called briefly The Notre Dame Scholastic, was inaugurated in September, 1867. Although the character of the magazine has changed over the years, it still is, as it was in those first days, a valuable source of information for anyone who wishes to know the chronicle of events at Notre Dame. From its contents, we surmise that Father Sorin was delighted, with the Scholastic Year. It contained well-written essays, somewhat pompous and florid; discreet accounts of recreational activities; delineations of progress at the University; and, best of all, little anecdotes about the students. Through its pages, Father Sorin felt that the parents of the students would be fitly impressed. At his suggestion, each issue contained the names of new students and the exact date of their arrival so that parents might ascertain "whether their sons had been loitering on their way to school."

The Scholastic Year was not the first of such journals. Neal Gillespie, in a letter to his mother on May 25, 1860, wrote that a "paper" had been started by the Seniors. They called it The Progress. It was a manuscript document of thirty or forty pages "on various entertaining subjects." The students gathered in the large study hall on Saturday nights, and listened to one of their number read the pages to them. Previous to this, The Notre Dame Literary Gazette had been passed around for perusal. The Progress came to an end in 1863 when Father Gillespie went to study in France. Also The Olympic Gazette and The Weekly Bee made fitful appearances on the campus. The return of Father Gillespie in 1867 renewed interest in a campus magazine, and with the encouragement of Father Corby and Father Lemonnier, The Scholastic Year was begun.