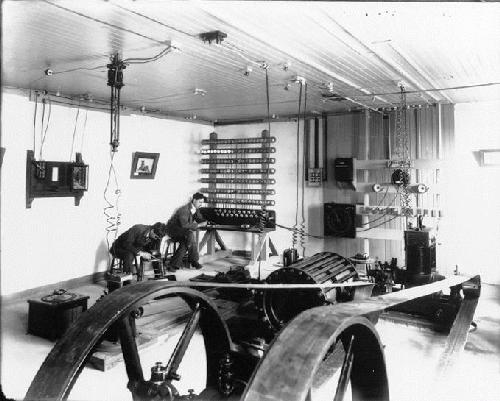 Mechanical Engineering Lab in Science Hall, 1890s
In the expanding field of science, Notre Dame had not kept pace with her contemporaries. Father Walsh was much impressed by the scientific curiosity of Father John Zahm and, still later, by that of his brother, Dr. Albert Zahm. Then, too, there was Father Alexander Kirsch, just returned from Louvain where he had studied biology under Abb‚ J. B. Carnoy. These professors had been giving their lectures in old Science Hall, as it was called, or Phelan Hall. These were two structures that had been part of the old church, the rear portion and the sacristy, and when the western extension, or Carroll Hall was added to the Main Building, it became necessary to demolish old Science Hall. It was imperative, therefore, that Father Walsh put up a building to house the scientific equipment and provide classrooms and laboratories.

In 1882 it was decided to build what is now known as Science Hall. Edbrooke, the architect for the Main Building, was retained to design the new structure. Work was begun early in 1883, and on June 20th of that year Bishop Watterson of Columbus blessed the cornerstone as part of the commencement exercises. It is of interest to note that that cornerstone was the gift of John B. Cassidy of the class of 1865, the first student to receive the degree of Bachelor of Science from Notre Dame.

The building itself was the fruit of Father Zahm's careful study. Zahm provided for things scientific on a grand scale for those days. He saw to it that laboratories were provided for physics, chemistry, botany, physiology, zoology, geology, mineralogy, mechanical engineering, and photography. There were also numerous class-rooms. In the centre of the building, and running two stories in height, was the museum for the display of various scientific specimens. Today that old building stands pretty much as it was then built, with the exception that it has received an addition at the rear for many more class-rooms.