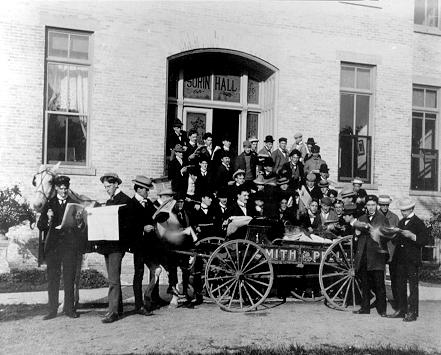 There were, nevertheless, some very outstanding professors at Notre Dame, for instance, Doctor Austin O'Malley. His sense of the fitness of things, his pungent sallies at examples of "gaucherie," his finesse in evaluating the merits of a question, gave the students a critical approach to themselves and their university. "You have here," he would say, "such a lovely church. And right next to it, that monstrosity, Sorin Hall! It looks like an old-fashioned ice-box, turned upside down!" And sure enough, it did, with its four conical towers, like the short, fat legs of an ice-box turned heavenward.

With the multiplication of residence halls, there developed a rivalry in athletics as well as in other matters. The Brownson Hall boys looked on the Sorinites as a sophisticated group. "Sorin Hall needs a good old fashioned shaking-up . . . in a mental and physical way. The majority seems to have no spirit for the support of enterprises, the absence of which they would be the first and loudest to decry!" "Kid stuff!" replied Sorin Hall scornfully. The men of Sorin were insulated and glad of it. When the rest of the University was in bed, Sorin had its own recreation room, with billiards and cards, where they could play "Old Maid" and smoke cigarettes, with Sorin's own orchestra dispensing sweet music, and, for shame, the windows banked with flowers.

On Sunday mornings an old gentleman from South Bend, his flat cart hitched to an old white horse, would draw up in front of Sorin Hall. After breakfast, the students made a bee-line to this old fellow to get the newspapers. The mail would be distributed, too, on the lawn under the trees. It was a great moment. The post-mark on all letters was duly inspected. Those that were mailed from South Bend were turned over to the Prefect of Discipline. Many a budding romance was thus ended.

Who can forget how Father Eugene Burke presided over Sorin Hall? One evening, the hand-bell might ring through the corridor. "What is it?" exclaimed many heads thrust through the doors. "Father Burke wants us to go to the recreation room." In all sorts of dress and undress the boys would gather. There would be ice-cream, or "hotdogs" with coffee, and sandwiches, perhaps. The boys would beg Father Burke to play the piano. They would gather around him, pressing closely to hear the words of some new "ditty." Father Burke was always composing some little song in which the Sorin Hall boys saw themselves portrayed -- "The Ten O'Clock Walk," describing the seniors going for their pitcher of water; "A Letter Home to Dad," from the Prefect of Discipline; "I'm a Bachelor of Arts, but My Art Is Love," "McNamara's Band" -- a dozen or more. No virtuoso ever had more attention, none more applause, and certainly none more genuine affection. When he threw his head back on some high note, and the pince-nez quivered on his nose, cheers and laughter floated through the open windows and brought Walsh Hallers from their desks. "Next year," thought the boys from Walsh, "we'll be in on that ourselves!"

Some nights Father Cavanaugh would saunter over to Sorin. His voice, pleasantly booming, might call for the ringing of the bell, and as the boys tumbled down the stairs, they would see John Cavanaugh and Gene Burke standing in the lobby. There was no stiffness or formality: a cheery greeting, a bit of razzing for those who could take it, a slap on the back, a touch on the arm. When they were all gathered in the "rec" room, Father Cavanaugh and Father Burke would enter. The President would wave the boys around him, they would flock near his chair and sit on the floor -- Tobin, Beacom, Ward; Conaghan, Musmaker, Ryan and Connerton, a litany of names remembered but too long to set down -- but they were all there, gazing with eager and unaffected attention into the face of a great charmer.

He might begin speaking to them of a cock-fight someone had told him about. His description was not so much of the fight itself as of the faces surrounding the fighting birds. One face be would paint with lust, another with fright, another with hate or pride or anger. Every quality of passion was let loose in his description. And the boys who sat around him were breathless at his story. No one moved with impatience although it was a wonder, for sometimes he talked -- and on this occasion he did -- for two hours.

Nor did he finish with a description of the cock-fight. All the brutality and passion and hatred, he would say, that we see on the faces of these men, is deep in your own souls, too. When men are gathered together without the refinement of a woman's company, something savage takes hold of their souls. There is only one thing that can keep man in check, the influence of a pure and virtuous woman. He would go on to say how he hoped that each of them would find such a woman if it were God's will that they should marry. But in the meantime, he added, there was a woman who had this power to check their restless lusts. She was the Lady on the Dome. If they would take her as their refuge and sweet hope, they need not worry about the battle against their passions.

As he arose, there was no applause. There was something infinitely finer. There was a silence as though he had spoken in church, almost as though he had administered a sacrament. Or perhaps, more correctly, the grateful reverence of children who have heard a wise father wisely instructing. Children do not applaud. It was of such days and evenings that John Cavanaugh's Notre Dame was made.