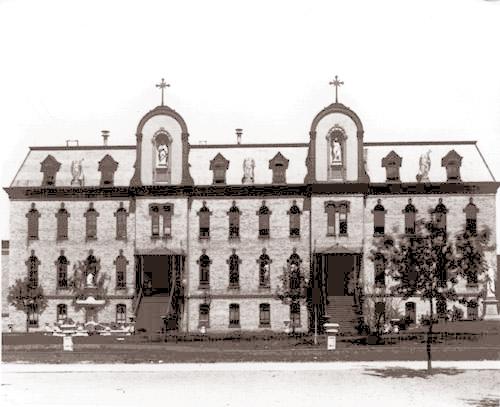 In February, 1882, Father Corby thought it was time to add to the eastern wing of the Administration Building, and thus to lengthen what today is known as Brownson Hall. The original plans called for this addition, as also for one to the west. A few months later the administration deemed it wise to give the Minims a separate building. It would not be large -- only ninety feet by forty -- a four-storied structure, to which an addition could easily be made if the number of Minims increased. Father Sorin laid the cornerstone on April 20, 1882, and made a graceful little speech to his "Princes." As erected then, the building comprised but one half of what is now called St. Edward's Hall.
. . .

In Father Walsh's day Notre Dame was considered as a place where one might begin his education at five or six years of age, and complete it after the attainment of a Bachelor's degree in one of the various colleges. Both he and Sorin had a very great affection for young children, and early provided for them an education under the Sisters of the Holy Cross. Those between the ages of six and thirteen were called Minims. Up until the great fire of 1879, they were housed in the Main Building. But with the growth of the University which followed upon Father Walsh's inauguration, it was felt that they must have a place to themselves. In the summer of 1882, accordingly, the University began the erection of what at first was known as "Minims' Hall." The Minims had also a four-acre play field to the rear of the building and an adjoining play hall used during inclement weather. In front, they had a small park or garden with a statue of Saint Edward, Father Sorin's patron saint. The Minims were Father Sorin's favorite group, and he called them his "Princes," and their hall, the "Palace." He encouraged them to bring new students by offering prizes and once more promised a royal Parisian dinner to celebrate the arrival of the one-hundredth Minim. The dinner took place on November 24, 1883, following the arrival of Edward Sorin Ewing, of Lancaster, Ohio. Sorin invited all the parents to come for the celebration, and he himself wrote a play called "The New Arts," which was performed by the Minims before the banquet. The growth of this department in the eighties was such as to require the addition of a wing to the east of the hall, and that was erected in 1887 to help house the two hundred boys in attendance that year.

Sister Aloysius was the head of the Minim department for so long that even she, blunt and direct as she was, might have objected to an exact computation of the period of years. Certainly it was in the early 1870's that she assumed the guidance of Father Sorin's "Princes." Of her ability and tact, there is no doubt. She was a lovable sort of tyrant who knew well how to get along with both parents and children. Hers was a motherly soul that went directly to the heart of these children in whom Father Sorin placed the "future of the Church in America."

Brother Cajetan -- "Caj," as he was called, -- was a simple soul. He had charge of the Minims, and was the male counterpart of Sister Aloysius. He marched around with a sawed-off broom-handle, which he called his "Wand," and he would gently tap the ankles of his charges to keep them in line when they were out on a walk. He was a man of great prayer. Once, when Father Cavanaugh received a letter from a parent of one of the Minims complaining that the Brother was a man of uncommon profanity, he thought the matter worth investigation. He interrogated the Minim, who volunteered the information that "Brother Cajetan swears after we go to bed at night." Father Cayanaugh stationed someone to listen. After the children had retired, sure enough, sighs and groans emanated from the Brother's chamber: "Lord, God! Lord, God! be merciful to me, a sinner! Oh, God Almighty! have pity on me!" Father Cavanaugh expressed himself satisfied with Brother Cajetan's profanity. He made the remark: "If Brother Cajetan's prayers are not heard in heaven, they certainly have been heard on earth!"

In the summer of 1929 the Minims were sent home, never to return as minims. It was not easy to see them go. A great deal of sentiment had attached itself to this institution on which Father Sorin had looked with so much fervor. A certain group favored the retention of the Minims as a sort of experimental school, a laboratory for the testing of the newer educational schemes and theories. But it was pointed out that St. Edward's Hall, the home of the Minims, could be renovated during the summer and made ready for two hundred college men. St. Edward's was opened to college men in September, 1929.