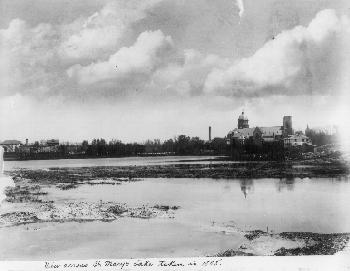 View across St. Mary's Lake taken in 1888
This lake, however much it might originally have vied in beauty with that of St. Joseph, has now a character of its own more akin to the spirit of the age. The floor of the lake is formed of white marl, and during seven months of the year laborers are actively engaged in converting this into lime, and it seems proved by experience that this lime thus formed is superior in quality to any that has yet been manufactured; and the inhabitants of the surrounding country, convinced of its superiority even to stone lime, have adopted it extensively, valuing it more especially for plastering purposes. Every year adds to its celebrity, so that it is now shipped by car loads to the neighboring cities, and promises in future to become a very important article of commerce.

These two lakes, each with its peculiar interest, form the finest feature in the landscape of Notre Dame. They are supplied entirely from springs, and their transparent waters wash shores of clean white sand and pebbles, and hide in the recesses multitudes of the finny tribe of every variety, from sturgeon to minnow. They afford rare sport to the pleasure-loving students both in winter and summer: bathing, skating, fishing. These lakes cover an area of about forty-five acres, and the groves on their banks are the resort of every species of game known in the country. As to the depth we will give you the opinion of one of the Minims, who having a plummet line twenty-five feet in length) gravely sunk it in both lakes, and finding that in one it reached the bottom, and that in the other it did not, pronounced this dictum: that one lake was twenty-five feet deep, and that the other was bottomless! How many opinions which have obtained currency in this world, have been founded on observations about as accurate!