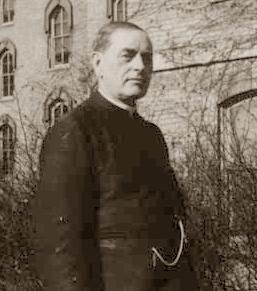 Brother Flo
[1866] The material improvements this year at Notre Dame were the painting of the outside of the college, and the painting of the inside in oak color, which wonderfully adds to the beauty of the two. Then the erection of the two lodges on the principal avenue, at the point of intersection of the road going towards St. Mary's, with a view to prolong thither the parterre that begins under the windows of the college. The two lodges are joined by a rail fence which closes the road, that to the east being used as a post office and the other as a porter's lodge, in which also Bro. Francis Xavier keeps a little store of religious articles.
-- Chronicles of Notre Dame du Lac / by Edward Sorin, C.S.C.

In the summer of 1880 the huge statue of the Virgin which now surmounts the dome was brought to Notre Dame. Since the dome was not finished, the statue was hoisted to the roof of the porch on the Administration Building. The interior of the building, which had been only roughly plastered the year before, was finally finished and painted. To Gregori, Father Sorin made the suggestion that he should make some sketches for a series of frescoes that might adorn the central corridor. The subject was to be the life of Columbus. The painter was to depict the glories as well as the humiliations of the great discoverer. These frescoes, coming, as they did, a short time before the Columbian Exposition in Chicago, were of special interest. Their artistic merit is not of a very high order. Our keenest recollection of them is connected with the Brother-porter who invariably repeated his set speech while showing them off to visitors. Before the painting that represented "The Mutiny," he would say, in a soft, rich brogue: "Notice the calm expression on the face of Columbus as contrasted with the fury of the mutineers. Please do not touch the murals!"

For years "Flo" was the porter at the Main Building. It was his general duty to meet visitors. He enjoyed the thrill of extending hospitality. It is said that one day a cleric climbed the steps accompanied by a young man. The cleric had a bit of purple showing beneath his collar and announced himself as Bishop White. "Flo" lowered himself to the floor -- it was not an easy feat for a man of his weight -- kissed the Bishop's ring, and, wreathed in smiles, conducted Bishop White to the Bishop's suite. As Brother Florian was about to take his leave, the Bishop thanked him very cordially and, pointing to the young man, he added: "By the way, Brother, this is my son!" For a moment "Flo" was flabbergasted. It dawned on him that he had kissed the ring of a Bishop of the Episcopal Church. Asking about the incident later, some one said: "Did you shake hands with the boy?" "My God, I can't remember!"

After the University had acquired several hundred artistic masterpieces, they were lodged in the upper rooms of the new library. On Sunday afternoons the gallery was open to the general public. "Flo" was deputed to conduct a "tour" for any visitors who showed up. Summed up, his remarks on these occasions constituted the most entertaining list of inaccuracies imaginable. From Sunday to Sunday, the stories would change and the value of the pictures would rise astronomically. "Flo" had an habitual disregard for fact which really hurt no one but which achieved the one effect that he thought desirable: "These people must realize that they are seeing something of immense value."

On hot days during the summer, Brother found it rather trying to conduct a crowd through the gallery. Instead, he installed himself at the circular desk in the lobby, a handkerchief stuffed around his collar, and in his hand a large palm-leaf fan which he slowly moved back and forth. If anyone came in to see the pictures, Brother boomed: "Stairs to the left if you want to see the pictures." On such occasions, after the gallery was closed for the evening, "Flo" would find his way back to the Main Building. If there was anyone on the front porch, he climbed up, heavy-footed and worn, and remarked with an expression of utter exhaustion: "Good Lord, a hundred and ninety-three of 'em. Walk and talk, walk and talk; I'm worn out."

"Flo" liked to create the impression that he was overworked and unwell as the result of his labors. In reality, he was well-fed and healthy. The students knew, for instance, that "Flo" always ate his big meals in quasi-secrecy. He sat down at table an hour before the general meal, and ate with the working men, whose appetites were enormous. And "Flo" matched them, appetite for appetite. An hour later, he showed up at the second meal, and when he toyed with his food and seemed listless about his vitamins, the student-waiters, who were wise to the whole proceeding, asked him: "What's the matter, Brother? Aren't you feeling well?" "No, I'm not. I just don't seem to have any appetite!" "Gee, Brother, that's too bad. You're working too hard!" This sort of solicitude gave "Flo" tremendous satisfaction.

Brother Florian was very acquisitive. He was a great collector of things that were left around or had been discarded. He gathered these things with an eye to the future when some friend of his might desire them. The fact that these "friends" might have to go to "Flo" for favors, put them in his debt. And that was just where the Brother wanted them. On one occasion, when Father Cavanaugh was away from the University, Father Joseph Burke decided that the carpet in Father Cavanaugh's room was not all that it should be and ordered a new one. Father Burke remarked to one of the other Fathers that he might have the old carpet if he could get to it before "Flo" got it. Arrangements were made with the man who was to lay the new carpet that he should take the old one immediately to "Father Will's" room and tack it down without a moment's hesitation.

"Flo" had had his eye on that carpet, but he was a bit too late. He went to "Father Will's" room, but found the door locked. There was a great deal of hammering going on inside. After some delay, the hammerer opened the door. With magnificent authority, "Flo" said: "Take that carpet up and bring it to my room!" "But I can't!" answered the worker. "It's already got a thousand tacks in it!" Non-plussed, the Brother withdrew. At noon, he beckoned a finger at Father Will. "Have you been up to your room yet?" he asked. "Yes" was the response. "How do you like it?" "Swell!" "And believe me, Father Will, I had a devil of a time getting it for you!"

I suppose every religious community has its characters. Certainly "Flo" was one of ours. Just having him around, with all his little peculiarities and idiosyncracies added something to the joy of life. He was very much a "Notre Dame man." He took a pardonable pride in the glory of the University. He wanted people to feel that, in the public eye, Notre Dame was seriously underestimated. Her beauty, her spirit, her magnificence were the things that pressed on his mind. Of course, "Flo" himself was not forgotten. It was a Saturday afternoon some years later that he lay a-dying. There was a football game at Notre Dame that day, and many of the old students had returned for the game. With sadness they learned that "Flo" was nearing the end. During the game, "Flo," in his sick-bed over at the Community House, turned his head to ask, "What's the score now?" Before the game was over, the tolling bell announced that he was no more.